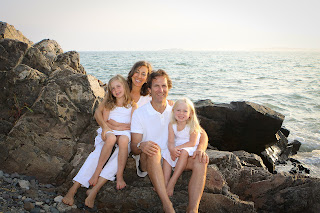 Hello!  That's me, the mom in the picture above.

In June of 2009, I had an annual checkup with my general practitioner in Boston.  I was given the thumbs up for excellent health, although I was slightly anemic.  Six weeks later in August, I was diagnosed with multiple myeloma, incurable cancer of the bone marrow.

How did they find it?

One month after my checkup with my orthodox physician, I called my naturopathic doctor to see if he had a solution for my continuous shin splints.  He pulled up my blood work from March which revealed elevated protein, white and red blood cells that were out of range, and a bad albumin/globulin ratio.  He also noticed that something was "bugging my liver".  He told me "you have a lot more going on than shin splints. I think you need to see an oncologist".  I hung up the phone in shock.  A couple minutes later, after gathering my thoughts, I called him back.  I asked, "do you think I have cancer?".  I know it sounds odd but I honestly expected him to say "no, I think you should just see the oncologist for preventive purposes", as if that ever happens.  He said, "Yes, I do.  I'm not an oncologist and I could be wrong but I think you have multiple myeloma".  At that time, I'd never even heard of this disease.

After confirming my diagnosis of multiple myeloma with two oncologists in Boston, we discussed treatment options.  To start, I would be on at least seven drugs....a couple of them to fight the cancer and the rest to neutralize the side effects of the others.  Once I was in remission, they would do another bone marrow biopsy (I had one when I was diagnosed and that was enough for me) and once the cancer returned we would continue with more drugs and multiple procedures, including one or several bone marrow transplants.  I won't go into the complications associated with a bone marrow transplant but it's extremely toxic and risky. I would do a lot to avoid having one. Eventually, the disease becomes resistant to all the drugs and takes over.   That's what they mean when they say myeloma is treatable but incurable.  At any rate, with this approach, I'd be putting my (rather short) life in the doctor's hands.

I've seen various statistics regarding life expectancy for myeloma patients.  Many people live only a few months or a couple years after being diagnosed.  Some people are lucky enough to live 10-15 years, although it seems that many of those patients start out with smoldering myeloma, the stable form of the disease.  According to my oncologist, I have the worst, most aggressive form of the disease, IGA myeloma.

I was thirty-eight, married with two beautiful daughters who were two and four years old.  My whole life was ahead of me.  I would've done anything just to continue being a mom and raising my girls.  In my mind, dying wasn't an option.

I asked the doctor if I could have a month to research my options and she said "No.  You don't have that much time.  Your disease is too aggressive and you need to start treatment  next week."

Well, I'm pretty head strong (if you know me and you're reading this, I know you're laughing!  :)  ) and I had already decided that this disease would not be incurable for me. It's not that I disrespect my oncologist, it's just that I know that orthodox physicians only have one way of treating disease and I was pretty sure that there was a better way.  The conventional medical diagnosis of "incurable" is only one perspective and I wouldn't bet my life on it.  So, I began to research alternative treatments and ultimately decided to do the Gerson Therapy.

The Gerson Therapy was discovered 80 years ago by Dr. Max Gerson.  His daughter, Charlotte Gerson, has kept the therapy alive since his death in 1959.  The therapy is based on the premise that if you detoxify the body and flood it with nutrition, your body will go into homeostasis and heal itself.  Dr. Gerson believed that cancer doesn't live in a healthy body and that all cancer patients have a weak immune system  and a toxic liver.  The goal of the therapy is to re-build the immune system and detoxify the liver.  Once the body is clean and noursished, it will kill off the cancer cells and restore the body to optimal health.  This may sound like a crazy concept if you're not familiar with the body's abiltiy to heal, but it works.  I've spoken to and corresponded with several people who have used the Gerson Therapy to heal their cancer that was diagnosed as "incurable" by an orthodox doctor.  Sadly though, Dr. Gerson had much more success (about 50%) than the doctors at the Gerson clinics today.

How exactly do you detoxify and flood the body with nutrition, you may ask?  Well, you flood the body with nutrition by drinking 12 glasses of fresh squeezed, organic vegetable juice a day.  One per hour.  In my case, I began at 7:00 am and ended at 6:00 pm every day.  Most of the juices were carrot based, although I also drank four green juices per day.  In addition, I ate a fruit and vegetable diet.  I ate a white potato, a salad, one or two cooked vegetables, and hippocrates soup for lunch and dinner.  Every. Single. Day. For. Two. Years.

It was the hardest thing I've ever done.

In addition, I did 4-5 coffee enemas per day.  The vegetable juices act like magnets, pulling toxins out of the cells and into the bloodstream.  The body's entire blood stream filters through the liver once every three minutes.  With so many juices, my liver was capturing and managing a lot of toxins.  The coffee enemas force the liver to open up and release its' accumulated toxins.  I learned pretty quickly that the coffee enemas were a good thing.  If I went too long without one, I experienced abdominal pain or headaches.  My Gerson doctor said the pain was caused by toxins in my bloodstream pushing on nerve endings.  Once I took a "coffee break", the pain went away.  (We began using the term "coffee break" consistently in our home after we learned that our two and four year old daughters were running around the neighborhood telling everyone that mommy was in the house doing coffee enemas)

When Dr. Gerson first created the therapy, it was a juice therapy, sans coffee enemas.  He eventually lost several patients to hepatic coma (liver coma) because the patients' livers couldn't handle the toxic overload.  The juices were extracting more toxins than the liver could filter and eliminate.  He then realized he needed to find a way to release the toxic burden on the liver and that's when he added coffee enemas to the regimen.  On a side note, a few years ago, I asked my general practitioner about detoxifying the liver and she told me that was ridiculous.  She said "your liver is your detox organ, there's no need to detoxify it".  Yet, here I am, a few years later, using coffee enemas to detoxify my liver and save my life.  Interestingly, coffee enemas were in the orthodox medical literature, including the Merck Manual, until the early 70s.

In addition to the diet, juices and enemas, I couldn't use anything that could possibly increase the level of toxicity in my body.  So, no showers, make-up, hair dye, deodorant, etc.  You get the picture.

Because I had to be home to drink fresh squeezed juice and do enemas, I barely left the house for two years.  Of course, this all would have been worth it if the therapy had provided the cure I was hoping for.

At the end of two years, my disease was stable and I was tired.  I'd yawn all day and was ready for bed at 8:30pm.

Atlhough I wasn't happy with the results of the therapy, I don't want to minimize the fact that my disease was stable.  My oncologist wouldn't let me wait even a month to start treatment because my disease is so aggressive.  The fact that I was stable for two years was a great achievement.  In the alternative world, doctors realize it's not stable cancer cells that kill people, it's proliferative, active cancer cells that  kill.  So, if I could keep the disease stable, I could live a very long life.

Fortunately, I was aware of another alternative therapy that sounded very promising.

Eighteen months earlier (about six months into the Gerson Therapy) I read Suzanne Somers' book "Knockout - Interviews with Doctors who are Curing Cancer".  The largest chapter in the book was dedicated to an interview with Dr. Nicholas Gonzalez, a doctor in New York who uses nutritional therapies to treat cancer.

A couple things stuck out to me when I read the interview.  The first thing I noticed was how effective his treatment is when compared to both the Gerson Therapy and conventional medicine.  Most of Dr. Gonzalez' patients have incurable cancer and have been sent home to die by their oncologists.  Once on the Gonzalez therapy, the majority of these patients  are outliving the expectations set by their oncologists by several decades.  The second thing I noticed is that he requires that his myeloma patients eat red meat.  I found this disturbing since I was eating a fruit and vegetable diet and Dr. Gonzalez' efficacy rates are much higher than Dr. Gerson's were.  I was immediately concerned that I was on the wrong therapy.

Per my Gerson doctor's advice, I stayed on the Gerson Therapy for another 18 months after reading the interview with Dr. Gonzalez, for a total of two years.  I wish I'd changed over to Dr. Gonzalez' therapy when I first read about it.  That's the thing about hindsight.

There is a silver lining though.  Since I was chained to our house, otherwise known as "Cancer Island",  for two years, I decided I should do some soul searching and I grew spiritually during that time.  I have a very different relationship with God than I had when I was diagnosed.  I'm truly a different, stronger, better person than I was two years ago and I wouldn't want to go back to who I was before.

At any rate, since David and I didn't feel I was going to improve any more on the Gerson Therapy, we decided to pursue Dr. Gonzalez' therapy.  It was an easy decision.  My odds of living a long, healthy life using conventional medicine are zero while my odds of living a long, healthy life on Dr. Gonzalez' therapy are 98%.  Dr. Gonzalez said that he sees an 80% success rate in his practice with patients who have the amount of cancer that I have.  He believes that nine out of ten of those who fail, do so due to non-compliance.  So, as of August 25th, 2011, we've started the new therapy.  We're starting from scratch, although my body is pretty clean at this point (meaning not too toxic).  So, I pulled myself up by my bootstraps and learned a new therapy.

We went to New York to meet with Dr. Gonzalez August 24th and 25th and our experience, so far, has been nothing short of miraculous.  Read on under the "updates" tab to learn more....

Theresa
I'm married to David and we have two beautiful girls, ages 5 and 6. I'm passionate about taking control of my health and would like to empower others to do the same.